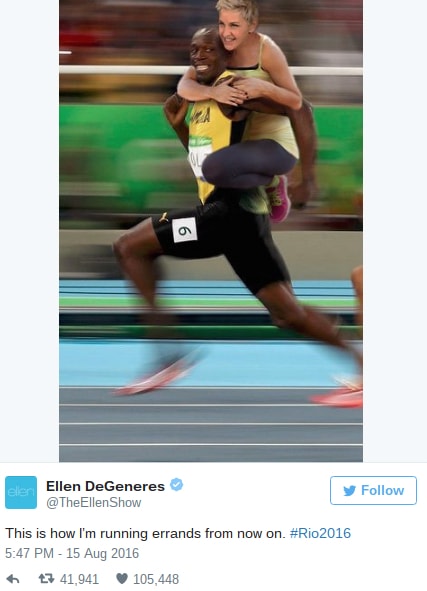 We are living in an age where each and every one of us are being held more accountable and to a higher standard; and social media is a big part of that. It is no longer about what you deem acceptable, but also how the folks in your circle and in your audience see it. All of us have been there in one way or another. You say something, write something, or post something; only to eat your words soon after. Sometimes it is “I shouldn’t have said that” and other times it is “I shouldn’t even be thinking this way”. With so many influences coming in from all angles, sometimes your view of things may not be as mainstream and legitimate as you think. As a PR and social media consultant, I tell some clients to just be themselves; while telling others not to be themselves until we clean a few things up from the inside out, and then present them as a good representative of their company values.

Ellen DeGeneres got called out on social media this week. She posted a photo of herself riding on the back of Usain Bolt, and folks were outraged. This post is not necessarily to say that the photo was right or wrong; but I will say that you and your Public Relations team better think a little deeper before posting things that may seem racist, bigoted, and prejudiced. There is some history and truth to “white folks” riding on the backs of “black folks”… so this must be taken into account. She was Just because a celebrity or person of authority thinks it is okay for them to joke in this manner does not make it right. Is Ellen DeGeneres a racist or is she a part of the white supremacy movement? I doubt it.

Now other things are coming out, putting Ellen is even a darker light. The National Enquirer just posted her Top 10 Scandals, and writes about everything from neglecting her father to some of her intimate relationship mishaps. Relentless to say the least. Now Steve Harvey is coming to her rescue because he has been around her so many times, and confirms she is not a racist. It’s not even about that Steve, it is about saying the wrong things at the wrong time, and posting it to social media. Of all folks, Mr. Harvey should know the backlash of even something as simple as a “Universal” misread. Some say Ellen was so wrong to post that photo, and others say it was no big deal. But for it to create such a fire storm on social media, it is enough to say that the jury has spoken, and it was not a good move. Or maybe just maybe it was a media move, calculated and planned to bring attention to the falling star who has not been in the spotlight much lately. Who knows?! Either way, be careful with what you think and say, and what you post on social media; because you may never to be able to delete it or take it back.