Situation:
Daryl Rantis Architects PA had no social media presence at all and wanted to participate in a very well known online contest sponsored by FreeGreen a Massachusetts company which features home plans that are sensitive to the environment. The competition is world wide and there were more than 400 initial submissions.

Problem/Target
Daryl Rants Architects had a very limited web site and no social media accounts, yet the company wanted to participate in an online competition along the lines of American Idol where online voting played a big decision in choosing the winner. They needed to create a campaigning in a hurry to drive voting by word of mouth through social networking sites. 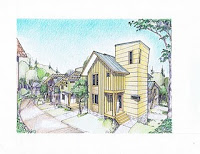 G Social Media established a campaign quickly and promoted the architects drawings through the proper channels over social media sites Facebook and Twitter. Since G Social Media has a number of networked blogs and marketing connections it was decided to take advantage of those resources to promote that an Asheville Architect was in competition against the world and leverage the community’s pride as a resource for voting. Daryl Rantis Architects design “A Modern Craftsman for the New South” won the top prize from the international competition beating out 12 other finalists including three other design firms from North Carolina. His design was featured prominently world wide on the www.FreeGreen.com web site along with 13 other of the company’s designs. The firm now has an international presence with 1,000+ video views on You Tube, 650 Twitter followers, and 137 Facebook fans.